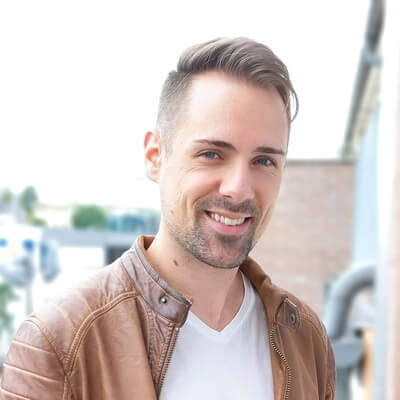 I help musicians get rid of playing-related injuries like wrist pain, tendonitis or carpal tunnel syndrome since 2017 with my 7 years of experience in the field of movement and health.

Guitar tendonitis is probably the most frightening injury among guitarists. (It certainly affects other musicians too, like pianists or violinists, but let’s not lose our focus.)

It this article we are going to go over the symptoms and the root causes of guitar tendonitis, and then the do’s and don’ts of a successful treatment plan.

First, what is tendonitis?

Every medical term ending in -itis simply refers to inflammation, so tendonitis literally means the inflammation of tendons (although you will learn that it’s much more than that…)

And the tendons are the structures that connect muscle to bone. They are much stronger and less elastic than muscles, with weaker blood flow. This is going to be very important later!

In fact, tendonitis is an umbrella term because depending on the location of the affected tendon, the symptoms can vary a lot. Guitar tendonitis usually affects the elbow, forearm (wrist), or fingers, so that’s where the symptoms develop. Sometimes these symptoms are given a name, like “De Quervain’s” in case of thumb tendonitis.

What are the symptoms?

(Some guitarists scream tendonitis as soon as they feel something in their wrist, but it’s usually not that after all…) 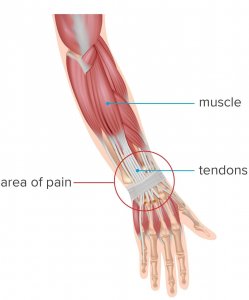 Now that we’ve got the fundamentals out of the way, let’s see how most people (including medical professionals) treat tendonitis.

They treat it as if it was simply an inflammatory condition, where the goal is to cover inflammation first with icing, then some OTC anti-inflammatory drugs (like NSAIDs), or topical creams.

Of course, none of these will work in the long-term, because they simply mask the symptoms without dealing with the root issues.

At this point, doctors might suggest a corticosteroid injection, which is the worst of them all. See the explanation below, in the text box.

So, with all this treatment, things might get better for a shorter period, but it’s almost 100% certain that there will be additional inflammatory episodes in the future.

If we want to get rid of guitar tendonitis for good, then we have to understand that inflammation is simply the tip of the iceberg. It’s a symptom, a consequence, and not the problem itself.

Inflammation is a healthy, normal response to tissue damage. And that’s exactly what the root of the problem is: tissue damage, or in other words, degeneration.

Degeneration? How is that possible?

Well, in a nutshell, the “root of all evil” is the repetitive, monotonous load inherent in guitar playing. Of course, it doesn’t have to be guitar – pianists or violinists are affected too, as well as desk workers.

This type of repetitive workload strains the soft tissues (muscles, tendons, ligaments, fascia) in one certain way over and over again. And as always, the body adapts. A healthy stimulus would bring a healthy adaptation, but this repetitive workload is not healthy, because it’s done in a narrow, restricted range of movement. So it brings an “imbalanced adaptation”, which means that, for example, some muscles will become too tense, too strong (overused), while others become too weak (underused). 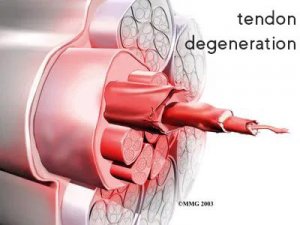 These tense, shortened muscles pull on the tendons, which creates micro-injuries in them – let’s call this degeneration. In time, this whole situation leads to irritation, and finally, to inflammation.

So, the main reason for guitar tendonitis is degeneration, or in other words, tissue damage or irritation due to tense muscles (and adhesions but that’s another story).

If you have tendonitis, you can be sure that there is some level of degeneration in your affected tendon. It’s probably microscopic, but it’s there.

How to heal guitar tendonitis

Now that we know the main reason, we can easily figure out what to do.

First, we have to reduce tension in the surrounding muscles and other soft tissues.

This is a “two birds with one stone” type of solution, because:

Then, we have to restore proper range of motion and ease of movement in the affected joint. In other words, we have to increase mobility. Why? Because restrictions and adhesions in the tissues make normal function impossible. This is where smart stretching and mobility drills come in, that load the tissues and joints in every direction possible. Be careful not to overdo this step…and wait until your symptoms are mostly gone.

Don’t forget nutrition either. It’s hard to build something new out of nothing. The body needs good quality, natural foods that are high in nutrients. You might want to supplement with collagen, vitamin C, and Omega 3 as well to aid tissue regeneration and to reduce inflammation naturally.

Of course, there’s more to it, but with the help of this guide, you should be able to research further on this topic.

But if you want to get back to playing guitar for hours every day without issues, then you need a professional and effective solution to guitar tendonitis.

The guitarstrength course is the best self-care method for guitarists, and now it’s available online. Check it out here: