how to improve your guitar practice?

What is muscle memory exactly? 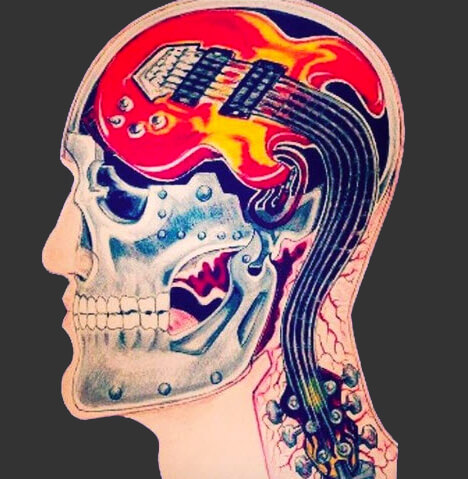 In a nutshell, muscle memory enables your body to perform recurring tasks with less and less energy and attention. Automation.

As a guitarist, muscle memory is key, since both improving guitar techniques and learning new songs require endless repetition, and thus the utilization of muscle memory.

But the name “muscle memory” is misleading: muscles cannot learn by themselves. Muscles, along with everything else in the body, are controlled by the brain – or, more precisely, the nervous system (which the brain is only a part of). During the learning process, the brain shows intense activation in certain areas, and when practicing guitar (improving the so-called ‘fine motor skills’), the hardest working part is the motor cortex, which is responsible for executing movements.

So learning is serious headwork, whether it’s picking up a new language or perfecting a physical activity (obviously we focus on the latter now).

This brain activation is simply the creation of new connections/pathways to store the learned element. And since the body is always striving for energy conservation, repeated ‘exposure’ forces the brain to strengthen and optimize these connections, until that specific activity becomes ‘cheap’ in terms of energy and attention.

The name of this process (which creates muscle memory) is consolidation.

The benefits of muscle memory are clear. But it has a disadvantage, too: you can build muscle memory for incorrect techniques and bad habits just as well as for the correct ones. The same process of consolidation takes place no matter what, so the more you practice wrong, the harder it will be to reprogram yourself.

This means it’s critically important to practice everything correctly from the start (easier said than done, I know!).

How to learn guitar faster

Now that we know what muscle memory and consolidation are, the question arises: how can we optimize consolidation to practice guitar more effectively?

Josh Kaufman, author of “The First 20 Hours”, explored how to learn anything the fastest way possible. He says, if we get it right in the very beginning and practice/learn in the best possible way, we can reach a surprisingly high level in merely 20 hours. This works for pretty much anything, like painting, photography, yoga, learning a language, or playing a musical instrument.

Of course, it’s not about becoming a master in 20 hours – that’s impossible. It’s about optimizing the way we practice, in order to improve faster than usual.

3 minute summary of his TED talk:

One of Josh’s tips for learning quickly is to practice before going to sleep. This is particularly important for movement-based skills (like playing guitar), as the aforementioned brain connections consolidate most during certain stages of sleep.

Moreover, according to several studies (and Josh’s personal experience), not only does the new stuff consolidate more at night, but it develops further. Meaning that if you practice before going to sleep and reach, let’s say, level 7, then by the time you wake up, you will already have reached level 8. Crazy!

Needless to say, consolidation is an ongoing process, so don’t worry – if you can only practice in the morning or during the day, that’s okay! You will still get better.

But to get the most out of your time…

Practice any new skill in the last 4 hours of your day. During sleep, your brain stabilizes what you have learned thanks to a process called consolidation.

Remember this the next time you need to learn a new song, a new technique or skill, or if you have only 10 minutes a day to play guitar!

Do you want to optimize the way your body works, so that you can play guitar better, and stay injury and pain-free?